***I'm most certainly not any expert on this subject... know that directly...

Here's some of what I do know however:

There are many differences between HooDoo & VooDoo...

I should probably research the later a bit more, though I'm not too fond of the idea of putting needles in dolls, nor especially fond of any kind of mal-intent towards others / baneful magic)k(. Note please that I just admitted not having researched it enough... so I'm going on my prior knowledge (most of which, on voodoo especially, has been implanted in different ways, from different sources/movies/people/groups/pop culture/etc throughout my life. So that's about the extent of my knowledge on "voodoo" ... which in my mind sums up to being "evil" and simply the attempt to directly harm others... which, more than likely, and based on being "wow-ed" by actual info gained via personal research on other topics, I've probably got that "definition" totally wrong/skewed... or maybe people do that stuff with pins/dolls even... probably so..., and maybe it's related to santeria, and maybe it's related to cock fights and animal sacrifice and whatnot and I'm saying that IDK. I/we should learn more about the specifics, from my opinion... especially before speaking on any subject, as I'm the hypocrite for doing right now... so I'll stop, and move on to:

HooDoo. Which I also don't know very much (though perhaps more than some) about either. I dp know that it's related to "conjure" which is interesting to me. When I evaluate the concept/practice/thought of conjuration, I think just that... thought! We conjure thought constantly, no? not to mention we can conjure up some tasty soup, plans, ... anything? 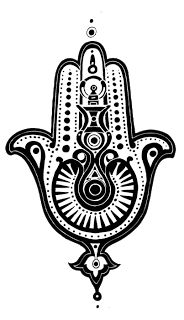 I see, in a sense at least, "conjuration", as being a form of creating... even if only as a thought form. I typed "if only" just then... Ha! Thought is the source of creation, a step(s) above the physical, but also step(s) below God/Spirit/Source ... the middle woman between the two... the space where/when we have the power to create and see the after effects/results manifest in the physical/Malkuth.

I know that candles are often used in HooDoo/Conjure, along with color correspondances[see 2nd Hermetic Principle: The Law of Correspondance]. Other correspondances are also used (ancestors? deities? Our Lady of Guadalupe?). 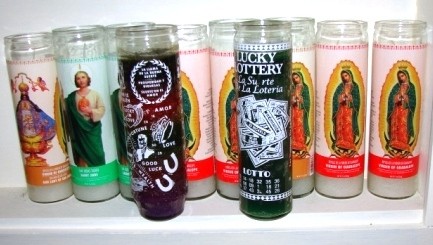 The Hand of Fatima may also be related, and from my limited understanding, the symbol pre-dates many of Judaism, Christianity, & Islam, though of course has different meanings in each. (always we loop back to perspective, though strive, and rise closer and closer to unity & balance yes? 🙂 )

This symbol, that I/we must research more, is important for many reasons. If you image/search/download it, you'll see different versions, with different symbols embedded with it as well (fractality? no... just encapsulation in most I suppose... regardless, embedded/encased/trapped within the main outer borders.)

So I think some may light a candle of a certain color... let's say pink. Let's also assume that the person doing so corresponds (in their mind) the color pink to that of "unconditional love" and not any others... as some correspondances may be sexual in nature...

So they anoint this candle with an oil ... and that oil has it's own correspondances (relative to the mage/witch/priest/wizard/conjurer in question also? though some correspondances in THE MIND or in the collective/all are more powerful and may override that persons??? idk...) Let's assume that it's a cinnamon essential oil, which may correspond to masculine/fire/speed/active and has many others I'm sure, but I'd assume the 4 I listed are accurate/powerful/directly related. And let us (for now at least) ignore the direction the person chose to rub/anoint the oil on the candle... but, let's also say that they light it... perhaps on some alter, that contains other depictions/symbols of ancestors &| deities, along with other things... perhaps salt... perhaps water... perhaps a food offering... Then, after perhaps centering/meditating/praying, as they light that unconditional love candle, they THINK &| SAY/VERBALIZE [and know that I'm not telling anyone to do/try any of this, but am also not telling anyone NOT to do/try this] the following: 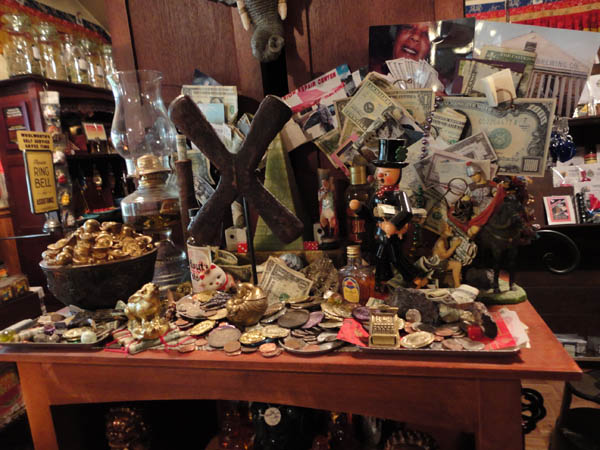 God/Spirit, I thank you for today and for all of the abundance I sense all around me. I thank you for the plants, the animals, and the humans, especially those that I may initially see as an annoyance, because I see that I learn from them, and how they too have God/Spirit inside of them. I wish that a HIGHER understanding of unconditional love be present in me and remain. I know it is not my job, not my highest will to judge anything at all, but rather simply to remain in constant unconditional love and awe of The every present, always obvious, magnificently beautiful Creation.

Right, and so that was just a random prayer/affirmation I typed on the fly. I do that mentally and I also verbalize these things and I type them out now as well apparently. 🙂 I'm also careful not to mention names, especially those of deities I don't know anything about. Why? Well... two answers I have for that: 1) fear... yes, I constantly banish more and more of this and approach it being nullified altogether. actually may be there already... in general. though my root chakra still spins of course. 🙂 2) it actually works, though perhaps not in the way the caster intends... (read that again... seriously), and the reason it does work, is because it's all mental, and we create that "frequency" to be pulled towards (or away, depending) from us. Don't expect lightning bolts from your hands (though not saying that's not possible either), but also don't expect a bed of roses to appear in your living room... because if you don't specify where, perhaps your spell will still work, though you'll think it didn't, but you just forgot to specific the location... and the next day that bed of roses is planted in the backyard of some woman/man that deserves to see/smell them instead. 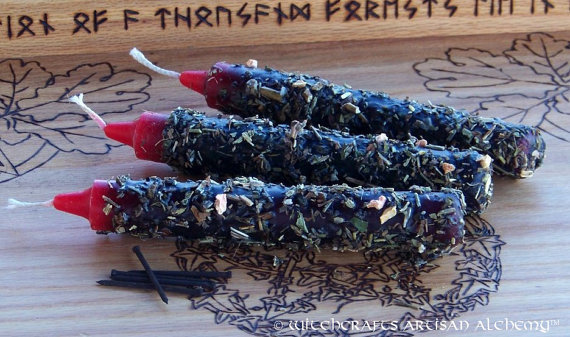 So I believe candles & other implements are commonly used (in HooDoo... remember I know next to nothing about VooDoo please... and that they are different). Oh, and for those "in the semi-know" already, but can't time travel nor have telepathy to know, no... I didn't actually do what I typed in the para prior... though may.

I think certain things are related to HooDoo/Conjure & would appreciate being corrected where I'm mistaken: candle magic)k(, thought forms (though this also to evocation perhaps?), alters and other common tools, Hamsa, Fatima, "Evil" eye (as an eye is often depicted in the hand), "Our Lady of Guadalupe"?, images/symbols of 2 thumb + 3 fingers, and perhaps has African, though I've already read South American roots? I have confusion about certain locales based on the confusion/intertwining illusions some have established with VooDoo, not to mention how different religions describe/depict/define/use this symbol differently. Is it the hand of Miriam? of Mother Mary? of Fatima? I've read all three and more. You tell me... I've also read it's related to Santeria even, practiced often in Louisiana... Ha, now I'm all over the place, no? 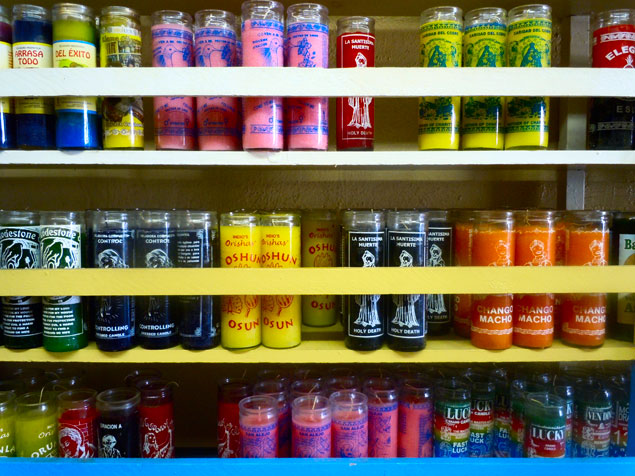 And so I just looked up "Santeria" and got the following result, and am quoting, from everyone's favorite search engine:

Santeria (Way of the Saints) is an Afro-Caribbean religion based on Yoruba beliefs and traditions, with some Roman Catholic elements added. The religion is also known as La Regla Lucumi and the Rule of Osha. Santeria is a syncretic religion that grew out of the slave trade in Cuba.

Wait... did I just read "some Roman Catholic" in there some where? lol! But what's even more hilarious is that I somehow, in my head, had a pre-existing association of "santaria" and "hoodoo", and for all I know, they too, just like HooDoo/VooDoo are probably not even very related, if at all...